Just a quick message to say I've started a new blog based around the battle of Formigny in 1450. Here's a taster: 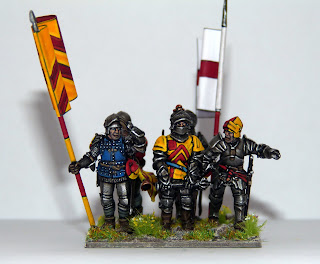 It can be found here: http://formigny1450.blogspot.co.uk/

Hopefully see you over there!
Posted by Brewdad at 10:55 2 comments:

Been a long while since I've posted anything here, this is largely because I've spent most of my time doing commisions. As a result I thought it might be a good idea to set up a new blog where you can have a look at my latest projects for other people and what I've got on my painting desk at the moment

If you fancy taking a peek it can be found at: http://thepaintingdesk.blogspot.co.uk/

The Swiss project is nowhere near complete and I'm sure I'll get back to it sometime soon, however you're more likely to find regular updates on the new blog.

Hopefully see you over there!
Posted by Brewdad at 08:59 No comments:

So, it's been a hectic few months with one thing and another and, as I mentioned before, I've been painting a fair amount of stuff for other people. However I have succeeded in finding a little time to paint some of my own models. My Vorhut was basically complete, minus the last rank which has been sat on my painting bench since about Feburary. I finally managed to summon up the enthusiasm to get them painted and this is the result: 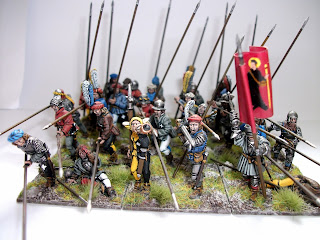 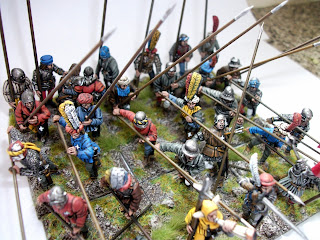 I'm really happy with how this unit turned out. The banner is that of Glaurus - I basically just threw it in as I liked it, not becuase it fits with the colours of the unit, but ah well. I painted it myself based upon an image I found online, supposedly of an original banner (though it may have been 14th C...) 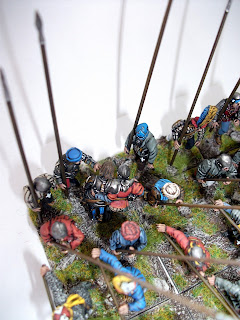 I used the man at arms being helped to create a sort of small diorama, as the rear ranks part to let him through.

So this is what my army looks like so far - not much to show for nigh on two years work to be honest! I'm happy with it though, the units look fairly imposing when they're all together 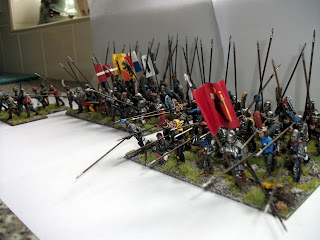 As a side note here are a couple of the things I was painting for others. The below models were painted up for David over at Claymore Castings - they're English in Percy livery for the Otterburn game they were organising. Lovely models to paint up and I thoroughly recommend them! 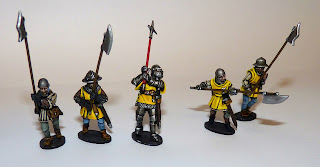 So, next up a few more commisions and then I'll try and get those mounted men at arms finally finished..

Well I've managed to get two more men at arms done over the last few weeks. They seem to have taken a long while as I've been fitting them in around archery stuff as well as making a concerted effort to improve my borderline awful French before we go away in a few months. Anyway I thought it could be nice to do one of the surcoated bodies (less plate armour to paint!) however I didn't want to just do them as retainers, I quite fancied tracking down some of the Lorrainer knights who fought with Rene and using their heraldry. So after a great amount of digging and several loose ends I discovered Oswald Von Thierstein - who had fought at the battle of Morat & Nancy with Rene.

I found this image first, from some sort of greeting card (you can get it as a phone case if you really want!) which shows Oswald on his horse and surcoated. I wasn't sure on how accurate the heraldry was, but I then found this when looking for the Von Thierstein heraldry: 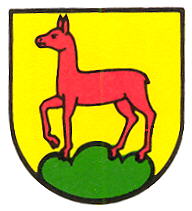 .. I thought I may as well use it as a basis, even if it possibly isn't bang on with accuracy. Using that I produced this model to represent Oswald: 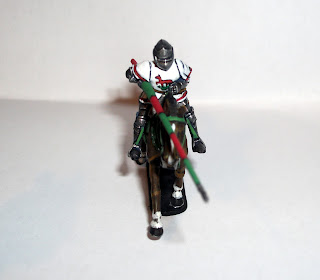 I'm fairly happy with how the heraldry turned out, though the deer was a bit fiddly to do! I tried doing blued armour on him, but actually it just looks the same as usual! 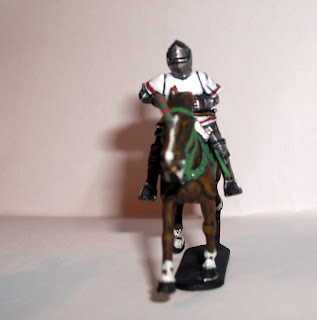 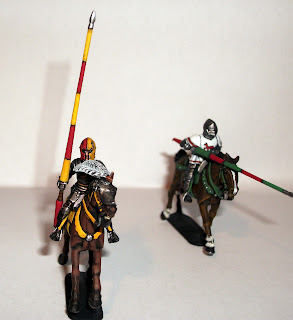 So that's seven down now! Could be a little while until the next update though (they were hardly speedy anyway haha) as I've been lucky enough to pick up a couple of painting contracts with a couple of companies, so I'll most likely be doing them instead of my own. I may well set up a seperate blog for these (if I'm allowed) to show what I've been painting.
Posted by Brewdad at 13:44 1 comment:

Some Men at Arms (at last)

Painting progress has been pretty slow over the last month or so - largely down to the fact that I hate painting full plate harness and also horses! So the new Perry stuff is sort of my idea of a nightmare, even though it is stunning. I've managed to get four men at arms done so far (7 more to do : /). 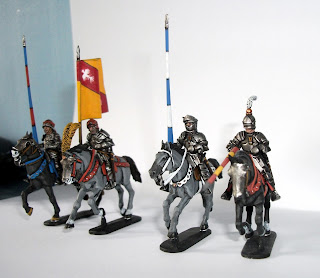 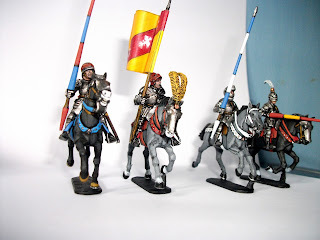 As you can see I've used a couple of heads from the WOTR and Mercenaries box, as I'm not overly keen on a few of the heads you get in the box. I'm going for quite a colourful look on these, multicoloured lances and bright barding etc. I quite like the chap at the end with the red and blue lance and gothic armour, he reminds me a bit of this Albrecht Durer drawing: 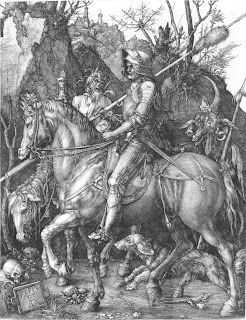 I've also done Rene's standard bearer, his banner was relatively simple to put together; I drew it up on Word and copied the birds in from an image on the web then painted it. Quite happy with the result. 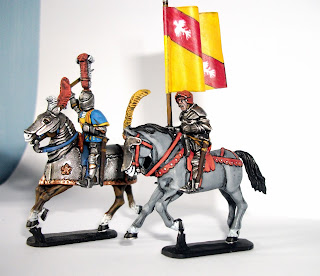 Here's the Duke himself with his standard bearer. I've also had a little play around with some of the spare arms etc that come in the box. The seperate hands mean you can make some simple but effective conversions. 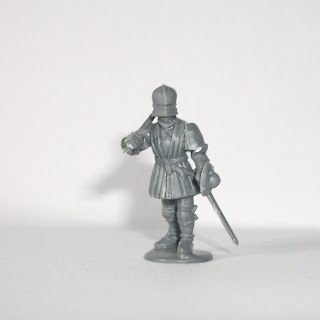 I put this chap together to lead my Nachut (who are a very long way off at the moment). I envisage them to be a fairly standard marching pike unit, yet to reach the action. As a result using one of the spare MAA arms I made this pose; quite like it. He looks as though he's fairly relaxed, but also fairly arrogant and skilled with that sword and buckler.

Well back to the grindstone - I'll try and get these last men at arms sorted.
Posted by Brewdad at 08:00 6 comments:

Well it's taken many hours but I've finally got my first mounted man at arms done! I have painted this one up to represent René II - Duke of Lorraine who will be the leader of my Swiss force. I used one of the bodies with a surcoat on as a basis, as I was keen to try and get René's heraldry on there. However I then realised I didn't have a clue what this looked like. A brief inspection of the Perry box showed he wasn't on there - so I set about researching. I came across this image depicting the Battle of Nancy which looks reasonably contempary 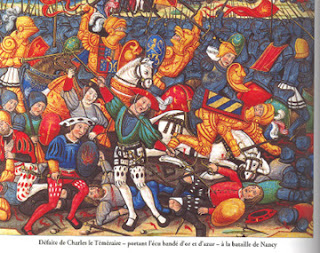 René is on the white horse, and his surcoat looks a lot like this other image I found: 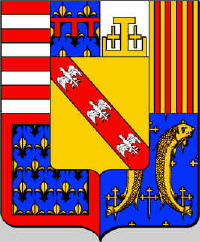 So I based the surcoat loosely upon it, and this is the result 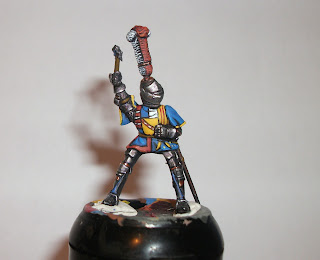 As you can see there are a few elements I didn't include, however I'm happy with it and think it's still recognisable. I've used one of the horses with the full Italian armour for his mount, I figure if anyone could afford the whole panoply it would be a Duke! I only plan on using around 4 of the fully armoured horses throughout the unit, the rest will just have trappers or nothing. 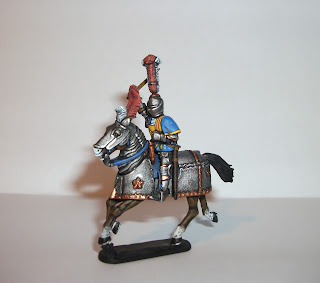 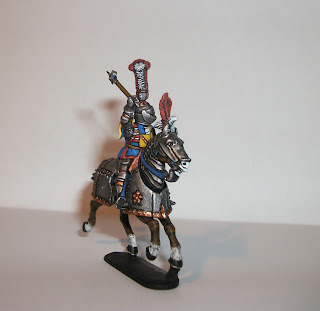 Sadly the horse seems to obscure the surcoat a bit but I like the final result. I've got to say these figures are definitely some of the best I've come across in about 15 years of painting, the details that's been incorporated is crazy and with the seperate hand system they're also ridiculously versatile. Now just another 11 to go... That's a lot of plate armour!

A much needed kick up the behind!

Well after saying so confidently last time I was back on the painting wagon I quickly hit a rut in the road and promptly dropped off again! My Vorhut are still staring at me forlornly from the shelf, waiting for a final rank and basing. I've been doing a fair amount of archery stuff so managed to fit in much painting, however I recieved something through the post earlier which may change all that....

That's right - the new Perry Mounted Men at Arms - I've only put two horses together this evening but Wow! The detail on the armour's immense and the various styles bring something completely new to 28mm plastic miniatues. Needless to say I'm impressed! After getting this far you may have realised that there is in fact nothing new to show off, however I basically wanted to pick the brains of any experts on heraldry out there.

I spent quite a while wracking my brains for a way to fit in a unit of mounted men at arms into a pike based army when I saw the models were being realised. After a little research I stumbled across Rene II, Duke of Lorraine who'd hired a force of Swiss mercenaries to reclaim the city of Nancy in 1477 (leading to the well known battle)

http://en.wikipedia.org/wiki/Ren%C3%A9_II,_Duke_of_Lorraine - have a look here for more info.

I'm thinking of using the body with the surcoat for Rene himself - so I can get his heraldry on there. However I'm fairly unsure as to what this looks like - my research has found this:

Which could be interesting to paint. I'm unsure if its right though. I'm also fairly unsure on Rene's banner, whether it would look like the above or something else. The Krigspil site has this: 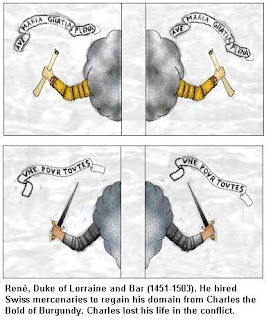 Looks a little naff to me though. So, has anyone got any other ideas? If not I'm sure I'll come up with something, though it won't necesarily be correct!
Posted by Brewdad at 13:32 2 comments: